A tomato, a Mercedes-Benz car, a uterus, a fish or a bottle of Coca-Cola. The Ghanaian artist Paa Joe and his workshop create coffins of almost all shapes possible. Catering for the local as well as international clients, Joe’s coffins are even parts of private and museum art collections. Originally called “abebu adekai” – meaning “receptacles of proverbs” – these coffins are known to the public with the attributes such as figurative, fantasy, custom or fantastic. The highly personalized coffins accompany the deceased on their journey to the other side while referring to their occupation, social status or sometimes their dreams that could not be fulfilled in this life.

If you had to choose one object that represents you as a human, what would you choose? This question is not uncommon for the people of Ga, an ethnic group in Ghana. It was in the 1950’s that the tradition arose to bury the dead in a coffin which represents their personality or occupation. Whether the origin of burying in unusual coffins comes from old Ghanaian traditions or from pure imagination of local carpenters is unclear. While some coffin makers deny any relation to customs, some researchers see a relevant connection with the funeral and burial traditions of the people of Ga. There is an anecdote about how the first fantasy coffin came into being. When the grandmother of the carpenter Ataa Owuo died, he wanted to at least symbolically grant her an unfulfilled wish. Since she always wished she could fly on an airplane but never had the chance to do so, her grandson Owuo made her a coffin in the shape of an airplane. 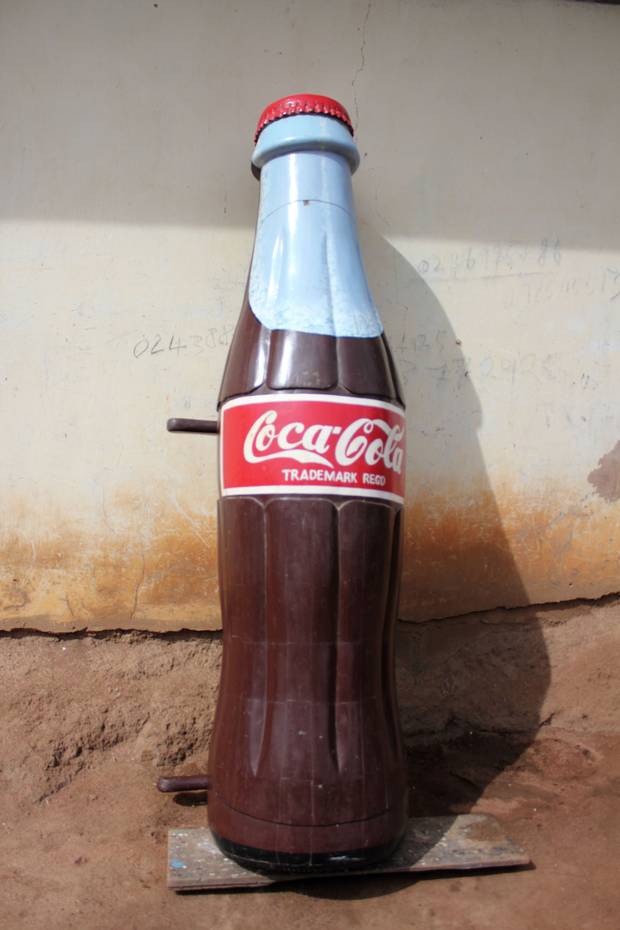 This month NBB Gallery will be showing a wooden coffin in the shape of a Coca-Cola bottle from one of the most prominent Ghanaian coffin artists Paa Joe. From the outside, the over two meter long coffin resembles the iconic Coca-Cola whereas the padded inside functions just like a regular coffin. The whole object is carefully polished with an opening on both sides. To make such a coffin Paa Joe and his workshop require approximately two weeks of intensive work. Usually, the work starts with the family of the deceased who visit the workshop in person to decide what shape they would choose. Paa Joe does not typically sketch any of his ideas but makes a concept in his head based on the wishes of the family. Once the idea is clear, Joe and his apprentices start to directly work on wood. All coffins are hand-made using no electronic tools. Once carved, Paa Joe employs an external painter that paints and polishes the final coffin.

There are over 80 coffins made each year in Joe’s workshop, which he established in 1976 after completion of his apprenticeship at the workshop of Kane Kwei. His coffins were soon discovered by tourists in Accra, Ghana’s capital city. Probably seen as rare and unfamiliar works of decorative art, western art curators and collectors noticed the coffins as well, so that in 1989, Paa Joe together with Kane Kwei were represented with their work at Centre Pompidou as part of the Magiciens de la Terre exhibition. Among being praised as one of the first truly global exhibitions, many expressed their criticism directed to the curator of the exhibition. Supposedly many objects in Magiciens de la Terre were religious artifacts from around the world that were taken out of their original context and their aesthetic value came to the front. This is also the case for Paa Joe’s fantasy coffins: An object of rather sensitive nature which is part of everyday life in Ghana on one hand and a beautiful example of mastering carpentry on the other hand. The conflicting nature of exhibiting such objects in an art gallery is reflected in the current ongoing debates and discourses in the art world regarding post-colonialism and globalization. However, Paa Joe has created some of his coffins as an exclusive exhibition objects so that in 2019 the American Folk Art Museum comissioned his coffins in form of architectural models of slavery forts for Gold Coast. Viewed in this way, Paa Joe accommodates the western art categories so that often his coffins are referred to as “sculptures'' or “sculptural objects'' while in fact being more faceted than just mere “sculptures''. Nevertheless, it is also a sign of Joe’s ability to reinvent himself.

Coming back to the Coca-Cola coffin exhibited at NBB, some questions remain unanswered: who is the person getting buried in a Coca-Cola shaped coffin? Perhaps a fan of the famous drink or an employee at a convenience store? What life did they live so that it led to a burial in such a coffin? What was their story? And what does such a coffin say about the presence of Western modernity in Ghana? Paa Joe is setting up an art academy where he will teach the community and art students from abroad how to make fantasy coffins with the aim to exhibit artworks from new artists across the globe. He is raising funds to complete this project.